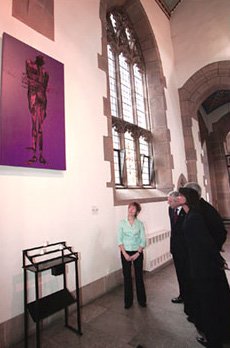 The Journey consists of 15 6ft oil paintings which hang throughout the cathedral to form a ‘walking route’ to follow the way of the cross with Christ on his final journey. Each painting, which depicts one lonely figure, has been painted in such a way to challenge and speak to all who view them.

“We are not just observers of the journey of Christ,” says the artist Penny Warden, “rather we use His journey to help us to understand our journey through life.”

Penny Warden writes, “My aim in painting these Stations of the Cross was to translate the familiar images of Christ’s final journey of trial, condemnation and eventual crucifixion, into a new arrangement of colour and form. I reduced the images to a minimum, to one lone(ly), life-size and faceless figure so that the viewer – instead of just observing a past event of someone else’s story – could enter instead into a dialogue with this figure. Whilst the stations are rooted in an historical event they speak universally of the human condition. ‘The Journey’ of Christ to his inevitable death is symbolic of all who suffer. 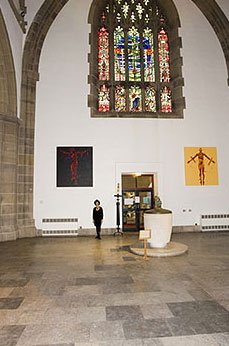 The vibrant colours of each Station of the Cross have been chosen carefully depending on what it was depicting and also the physical location of the painting in the cathedral.  The first station is predominantly purple suggesting the royalty of Christ and the robe given to him by his accusers.  This theme of purple carries on through each painting mainly in a crown of thorns and in Christ’s wounds.

There is a notable absence of any cross in the paintings, although it is strongly implied in each and the viewer is encouraged to look for it. The lack of a cross may enable the paintings to reach out to as wide an audience as possible. However more importantly, it is to convey to the viewer that suffering is not only caused by external factors or is imposed by others, but it is also an inner experience, inseparable from life.  The paintings try to speak of the anguish of human life and of our feelings of abandonment and alienation.

Importantly a 15th Station of the Cross was added – the Resurrection. This is rare, as traditionally the Stations end with Jesus being laid in the tomb. However this series of paintings aims to express the Christian hope, and that which survives the desolation and destruction of human suffering, namely the human spirit. As St Paul writes, “we are afflicted in every way, but not crushed; perplexed but not driven to despair; persecuted but not mistaken; struck down, but not destroyed.” 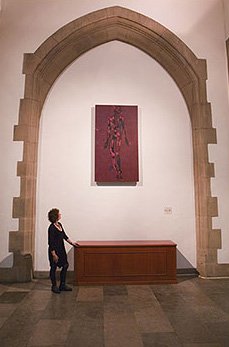 Penny Warden’s contemporary Stations of the Cross “are both striking and sensitive encouraging the viewer to notice what she has seen. By exploring a traditional subject in a radical and contemporary way she presents the familiar to a Christian audience in an unfamiliar way and engages with believers and non-believers alike”. Nicola Currie writes in Anglican-Episcopal World (Trinity 2005)

“When you have walked the journey in Blackburn Cathedral you will leave having discovered a little more of what it means to be human in an age where inhumanity must not be allowed to win.” (Canon Chris Chivers)