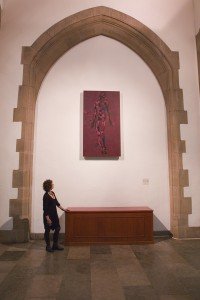 Penny Warden began to paint at a very early age and indeed was highly commended for her work by the Royal Drawing Society when only 12 years old.

Despite the protests of her art teachers she did not continue in her art studies after leaving school but pursued various careers in the city of London and finally in teaching after graduating in 1984 with a degree in Theology from Westminster College, Oxford.

However, Penny continued to paint, even when heading a Religious Studies Department and raising two children. Finally after beginning a degree in Fine Art in the late 1990’s she became a full-time artist in 2001.

Penny’s work has appeared in many high-profile locations and galleries across London and the UK. She has been interviewed several times on BBC radio, filmed by the BBC for a popular program ‘Flog It’ and her paintings have featured in a number of national and international magazines and publications. Her work has been used by Cambridge University and she has exhibited and spoken about her work at Oxford University.  She has been a speaker at numerous conferences and invited to give the ITIA Research Seminar at St Andrews University. She has been part of several consultation groups at Windsor Castle on ‘Human Creativity in the Arts’. Penny is a Trustee of The Christian Arts Trust.

Penny paints her images with a maximum of spontaneity and energetic expression. The sense of movement and vibrancy, which is Penny’s trademark, is especially evident in her figurative oil paintings. To see her gallery work please visit www.pennywarden.com